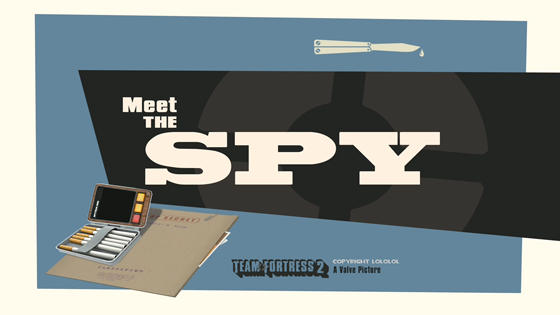 Meet the Spy is is the 8th short animation based on the game Team Fortress 2 created by Valve Software.
The Meet the Spy short is a very good example of the style of animation that I am interested in creating. Everything from the way it is rendered to the character models and animation is very stylised and exaggerated. Although quite cartoony everything still moves in a believable way so as to not be too unrealistic.

The 12 basic principles of animation are used all through this animation but I will only be focusing on 3 of those 12 principles.
1. Staging
2. Secondary Action
3. Exaggeration
Staging.
Some of he different ways that staging is used in the animation are to introduce the different characters and also to emphasise the action or reinforce the dialogue. 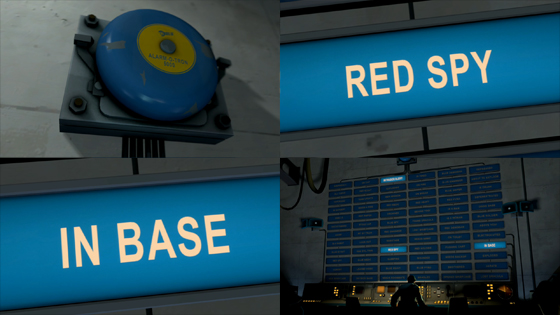 The introduction uses a very over the top camera move to introduce the audience to the story. It zooms round a rather large elaborate computer system that displays a relativly small amount of information. This staging really emphasises from the start the tone and humour of the animation and that it is something that should not be taken too seriously.
The introduction of characters and the reveal of information.

The shadow of the Heavy is seen approaching before we see him turn the corner.

The camera zoom between 2 characters to introduce the Blue Spy.

The camera move as the Sniper is dropped onto the desk to reveal the knife in his back.

As the Scout bends down we see the Soldier and Heavy checking out the photos.
Secondary Action.
The use of secondary action is implemented well as shown in these examples.

The Scout cutting himself while trying to close the knife and then moving his hand to his mouth.

The Blue Spy closing the knife and lighting the cigarette.

The Sniper checking his wound during the fight. The Red Spy brushing his suit after killing the Sniper.

The Soldier holding onto his hat while running and then tapping the foot of the Blue Spy to see if he will change colour.
Exaggeration.
As well as the images above here is a collection of some more of the exaggerated poses and facial expressions. For me a large part of the appeal of this visual style is the use of exaggeration in the animation. 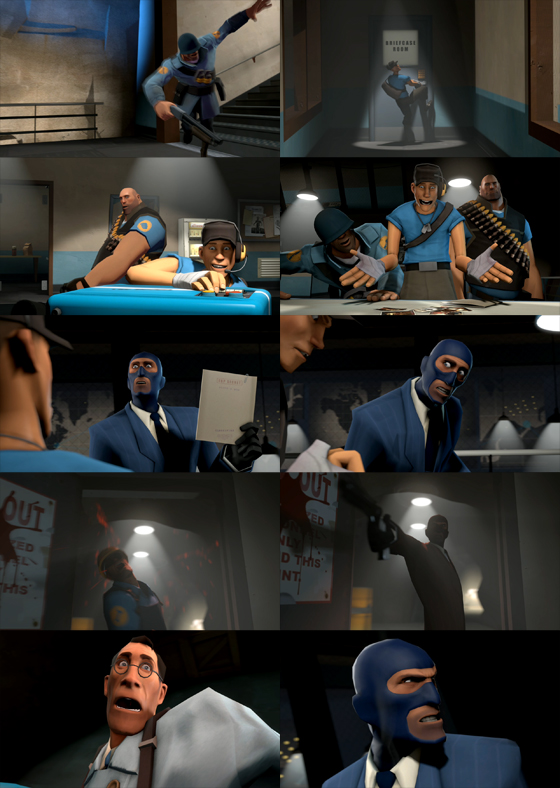 The 'The Meet the Spy Presentation' power point file.