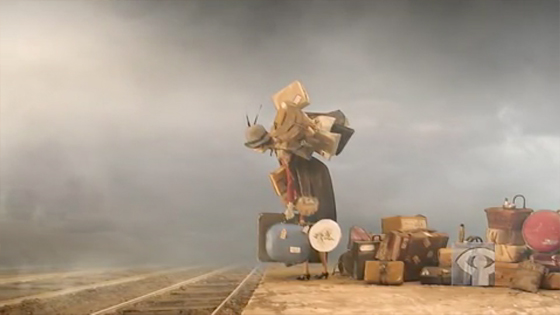 The atmosphere and mood of the film at the start is quite lonely, somber and uncomfortable. These are reflected in the character of Madame Tutli-Putli, we see through her movements she is uncertain, nervous, filled with anxiety and is quite solemn and lonely. These characteristics are heightened even more as the atmosphere and mood grows darker, more hostile and tense as the film goes on.

Sequence One:
Slow track past the long line of luggage ending with Madame Tutli-Putli alone at the edge of the platform. She is seen hunched over bundled with lots of baggage getting bothered by a small moth and then almost knocked off her feet by the force of the stopping train. These 3 shots introduce us to the idea that Tutli-Putli is lonely and uncomfortable in the world around her and that she perceives it as an unfriendly, potentially dangerous and hostile place.

Sequence Two:
Set in a small enclosed train compartment we see Madame Tutli-Putli sitting alone taking up a very small amount of space compared to her mass of luggage emphasising her loneliness even more. There are other passengers in the carriage but none of them are very friendly.

There are the chess playing men who are more interested in their game than anything else.

There is also a sleeping grandfather and a young boy who is reading. The one time Tutli-Putli actively tries to open a dialogue with another passenger is when she waves at the young boy who then hides behind his book titled 'How to Handle your Enemies' using it almost like a shield while staring back at her.

The last passenger is the Tennis Pro. Very forward and interested in only one thing. His actions make Tutli-Putli extremely uncomfortable as we can see by her reactions and posture at the end of the sequence.

Sequence Three:
As the sun goes down and night sets in the train has stopped for some unknown reason. With the other passengers asleep Tutli-Putli is hunched over close to her luggage, cowering with fear as to what is going on, which isn't a lot. She is very hesitant to move but after thinking about what to do she looks out the window only to be frightened back to her seat by some unknown rumblings from the train.

Until this scene there has been an underlying musical score. It was a very slow ponderous melancholy theme. Very solemn and mournful, it reflected the slow pace of the film and movements and mood of Madame Tutli-Putli. But now the music has stopped and all that is heard are sounds effects like the groan of the train and rattle of luggage. This really changes the atmosphere of the film, the restrained sound design combining silence and subtle sound effects make you feel quite uncomfortable and not at ease.

Sequence Four:
Here we have the introduction of the three intruders as they look down on Tutli-Putli in her attempt to write a letter. Her uncertainty and hesitation in the simple task of writing a letter supports the notion that she is  unsure and not confident within herself.

You can also really feel her fear and anxiety when the intruders have boarded the train just through her positioning in hiding behind her luggage, the difficulty in the way she forces herself to move and through her facial expressions.

When the intruders are first seen there is a hint of a new sound breaking the silence. This really kicks in when the train starts to move again where it slowly builds and builds creating extreme tension with sustained notes and uncomfortable noise until the train impacts with the deer. The camera angles and very fast editing of the 'Deer in the Headlights' sequence also adds to the tension created by the intense sound design.

Sequence Five:
Once Tutli-Putli leaves the carriage her only desire is to escape. All of her actions support this goal as she tries to get away. Still driven by fear, her movements reflect this when she is slowly working her way down corridors and checking round corners until the point where she cant hold her fear in any more and starts to run frantically through the train carriages until she trips over in the dining car. As she is moving through the train the camera reflects the frantic nature of her running as it becomes almost like a hand-held camera trying to follow and catch up with her. The result is a very kinetic sequence that heightens the tension and makes it more real. The sustained notes and uncomfortable noise is present in this sequence but not as prevalent, it is the sound effects of the moving train that are used to create the tension but are much louder and more intense than before. 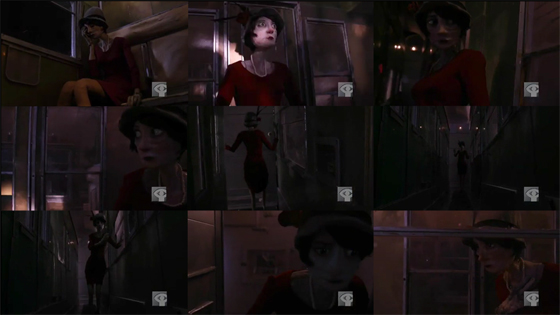 Sequence Six:
Throughout the film there has been the image of a moth flying around. Once at the start of the film just before the train arrived at the station and then again just before the intruders entered the train. The moth also reappears in this final sequence.  As Tutli-Putli picks herself off of the floor we can see by her movements and facial expression that she is emotionally and physically exhausted from her ordeal. The audience too is exhausted, but seeing the moth flying round the carriage and then resting on the fork seems to imbue Tutli-Putli and us as an audience, with a sense of calm and ease that up until that point we have not seen from her. As she rises from the floor she initially struggles but after a moment composes herself with a breath and then begins to follow the moth to the end of the carriage. Unlike all of her other movements the way she walks here is very calm, composed and she moves quite confidently. The moth seems to be a guardian to Tutli-Putli, earlier acting as an indicator of impending danger but now as a symbol of hope or guide to safety. The music used here also adds to this sense of calm and hope. 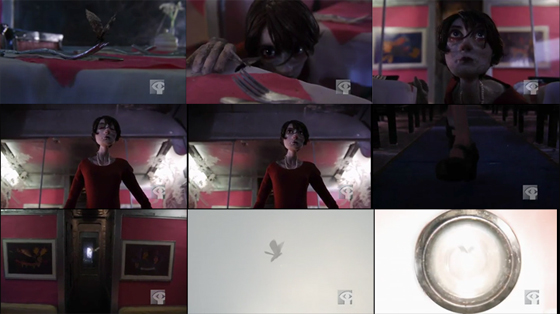 It is the emotional responses of Madame Tutli-Putli that drive the atmosphere and mood of the film for the audience. All of this is conveyed by the way the character is animated, through the poses, movement and especially by the facial expressions. The combination of live action eyes composited onto stop-motion puppets creates a unique look visually but also really emphasises the emotional state of the characters.
Posted by Adam Thomson at 10:00 PM